While we say goodbye to 2017 and inch closer to opening day in 2018, Diamond Dynasty celebrates a year of baseball and beyond.

This season, we witnessed surprising breakout performances and expected dominance from veteran stars. That’s why we felt compelled to create 16 special Flashbacks to commemorate The Show’s Finest, including the MVP and Cy Young award winners.

Hardware Flashback Jose Altuve is the final reward of the Finest Program – a Program that rewards you with a total of four Diamond Finest Flashbacks, 21 packs, plus XP, Stubs and Tickets.

The Finest Program Missions challenge you to hit and pitch with every type of player Series in Diamond Dynasty, from Rookies to All-Stars. You can complete these Missions against the CPU or in multiplayer games.

As you finish your Missions, you can redeem the following 2017 Finest Flashbacks in the Program: 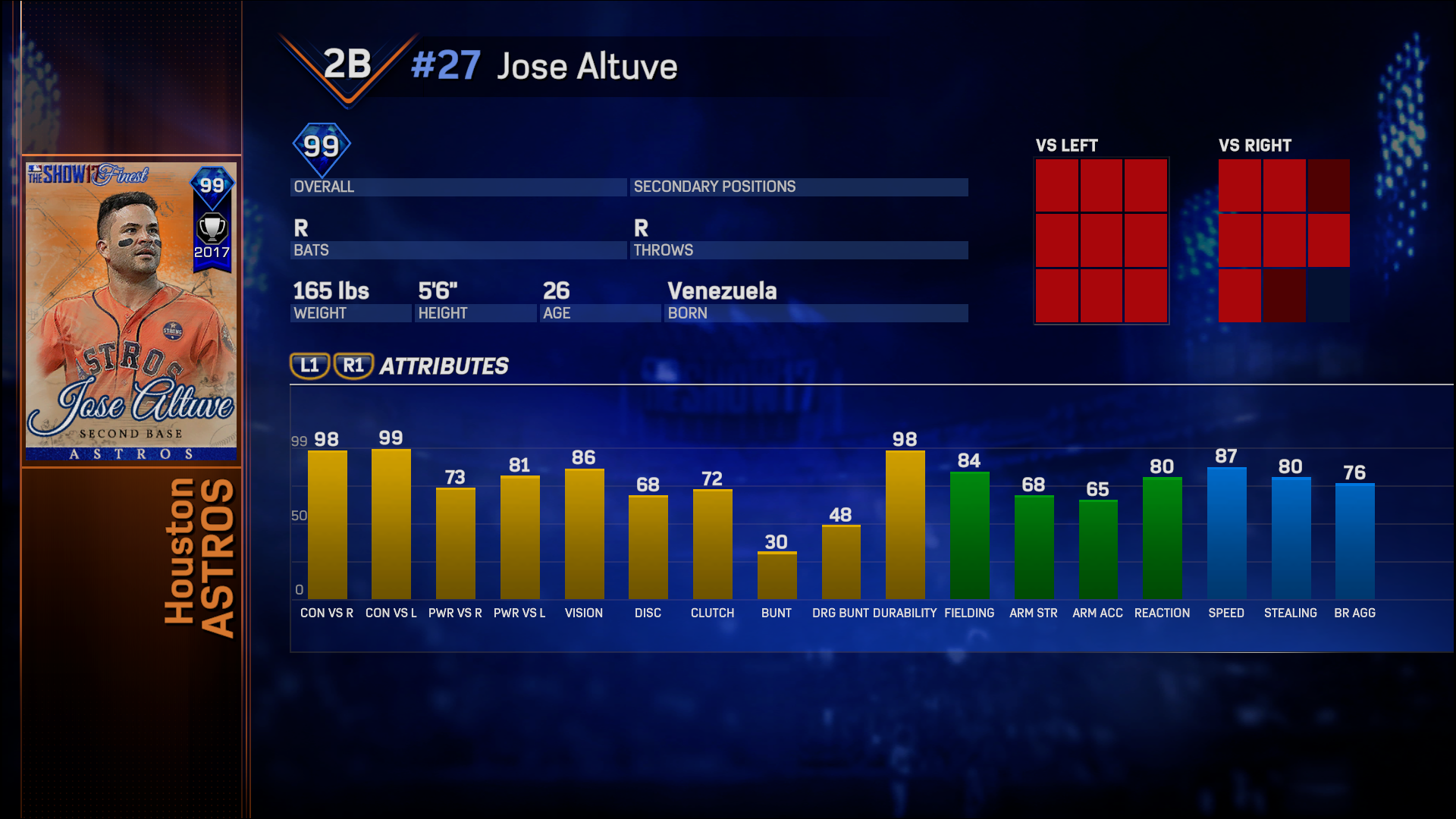 In addition to the hitting and pitching Missions, you will need to collect 10 of the Finest Flashback player items. They can be acquired through the Community Market, Ticket Counter or in the new Finest Pack.

In the Show Shop, the Finest Pack guarantees one Diamond Flashback needed in the Finest Program plus three other player items.

The nine Finest Flashbacks appearing in the pack include:

Three more of the Finest Flashbacks appear in the Ticket Counter: 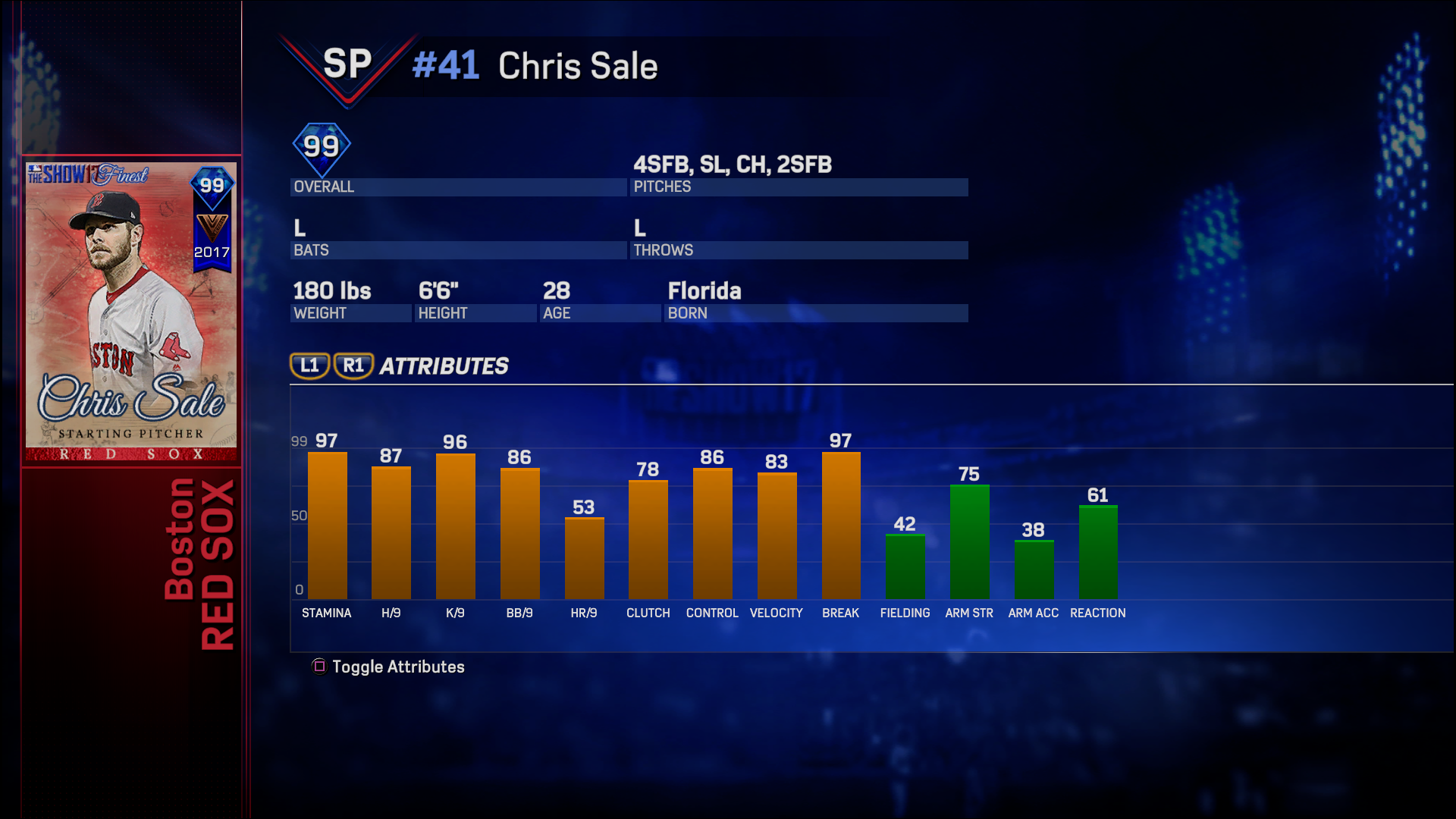 The former most valuable player, Hardware Flashback Ryan Braun, is the new reward for the Holiday Player Epic. You will need to play with Legend and Flashback outfielders and collect the new Holiday equipment to earn his 99 overall Flashback player item.

Look for the new Missions under the Player Epic Mission category screen in Diamond Dynasty. 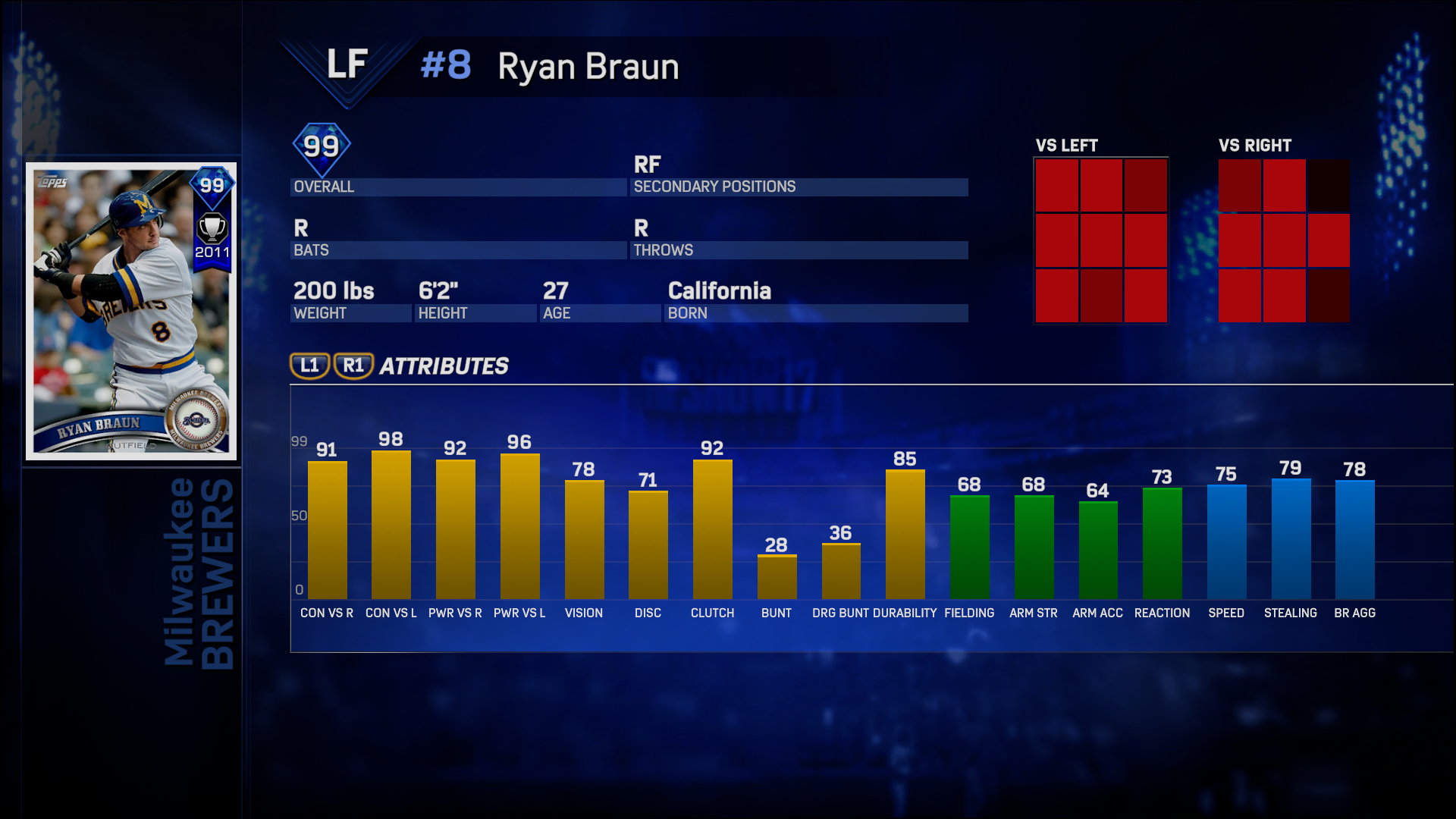 In the Show Shop, the new Holiday Pack guarantees one Holiday equipment item and three other player items. There are six different pieces of Holiday equipment to collect in the Holiday Epic for Flashback Ryan Braun. The equipment can be bought and sold on the Community Market (Tip: use the Rarity filter and select Holiday).

The final, never-ending Event in MLB The Show 17 is fittingly called the Forever Event, and it features two powerful Flashback rewards! Similar to an Event earlier this year (Advantage: Hitters), you should prepare for back-and-forth slugfests as lineups will be loaded with elite hitters and Silver or below pitchers. 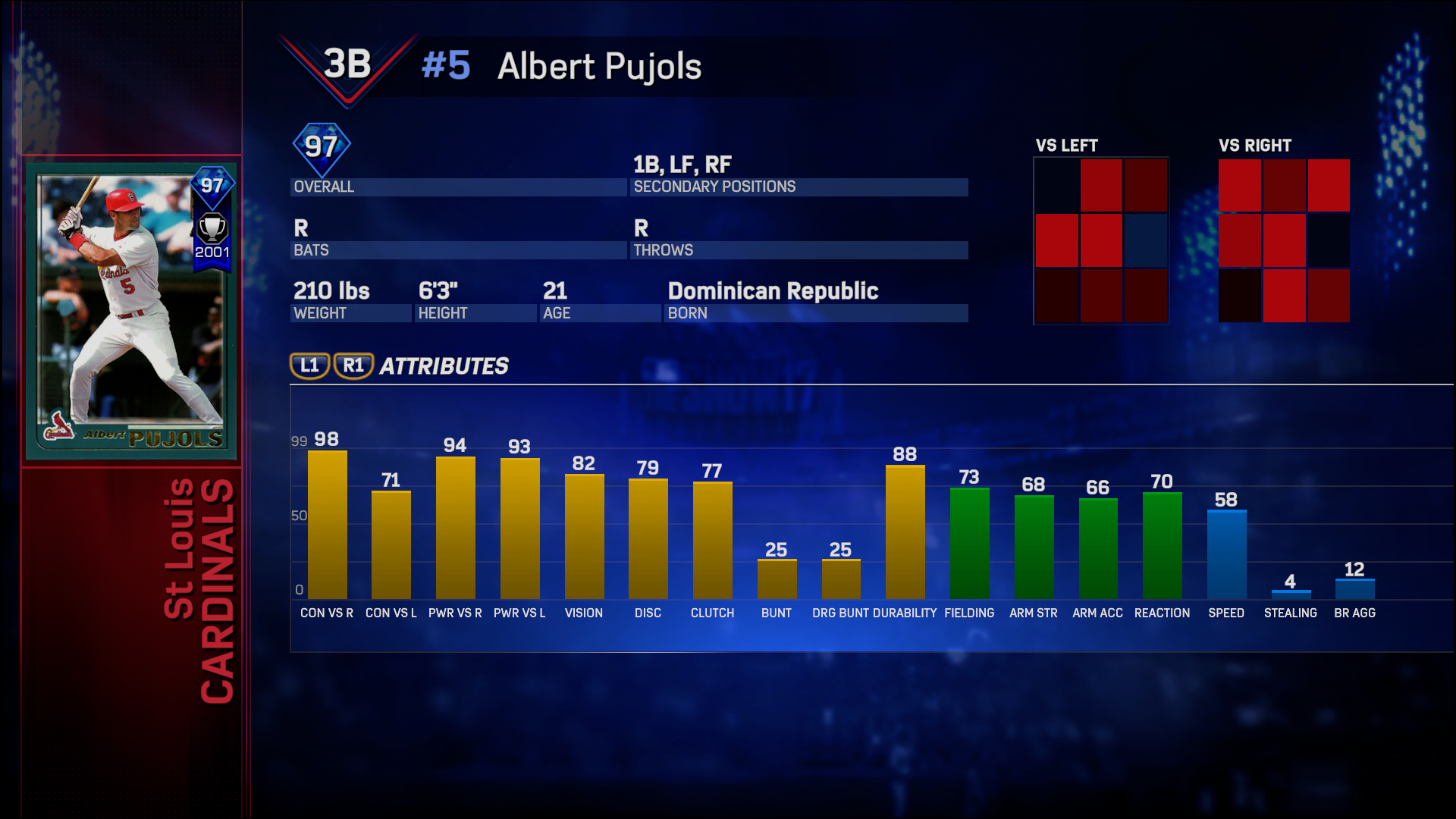 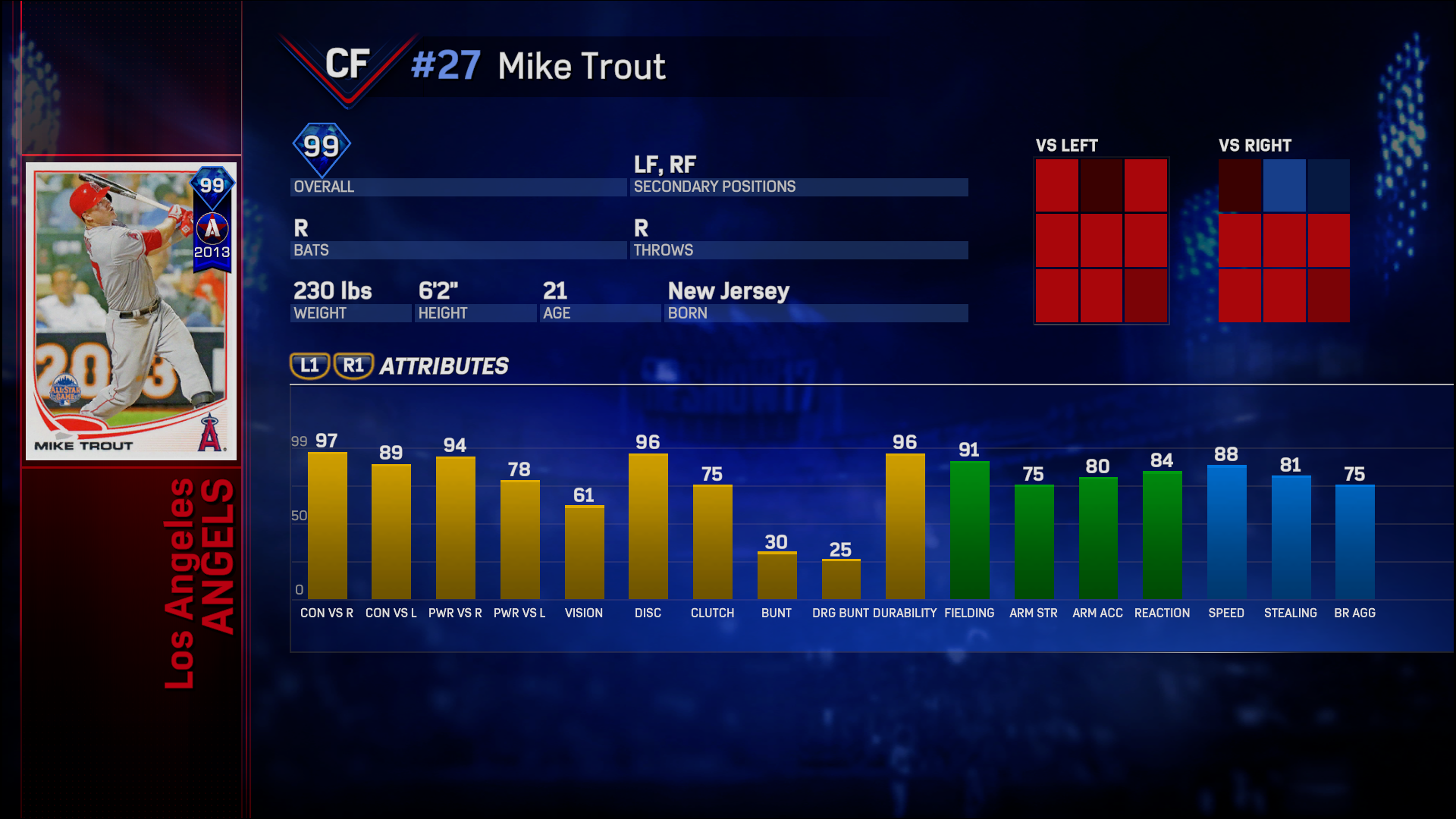 Q: Do I have to win 12 games-in-a-row without losing to get these rewards?
A: No. Similar to Battle Royale, you can earn the 12-win reward even if you lose once during the entry. Your record would be 12-1. Your wins per entry only resets after losing twice.

EVENT DOUBLE ELIMINATION
Two losses eliminates your current lineup entry from the Event, but you can re-enter for free right away with any lineup that meets the Event requirements. The benefit of double elimination is the opportunity to rebuild your team if you want to swap out players.

Q: If I lose two games and my current lineup is eliminated from the Event, does it reset my Cumulative Wins?
A: No, the Cumulative Wins will keep counting.

You can find big discounts in the Show Shop on all bundles of Standard Packs – and the best part – the new prices are permanent. 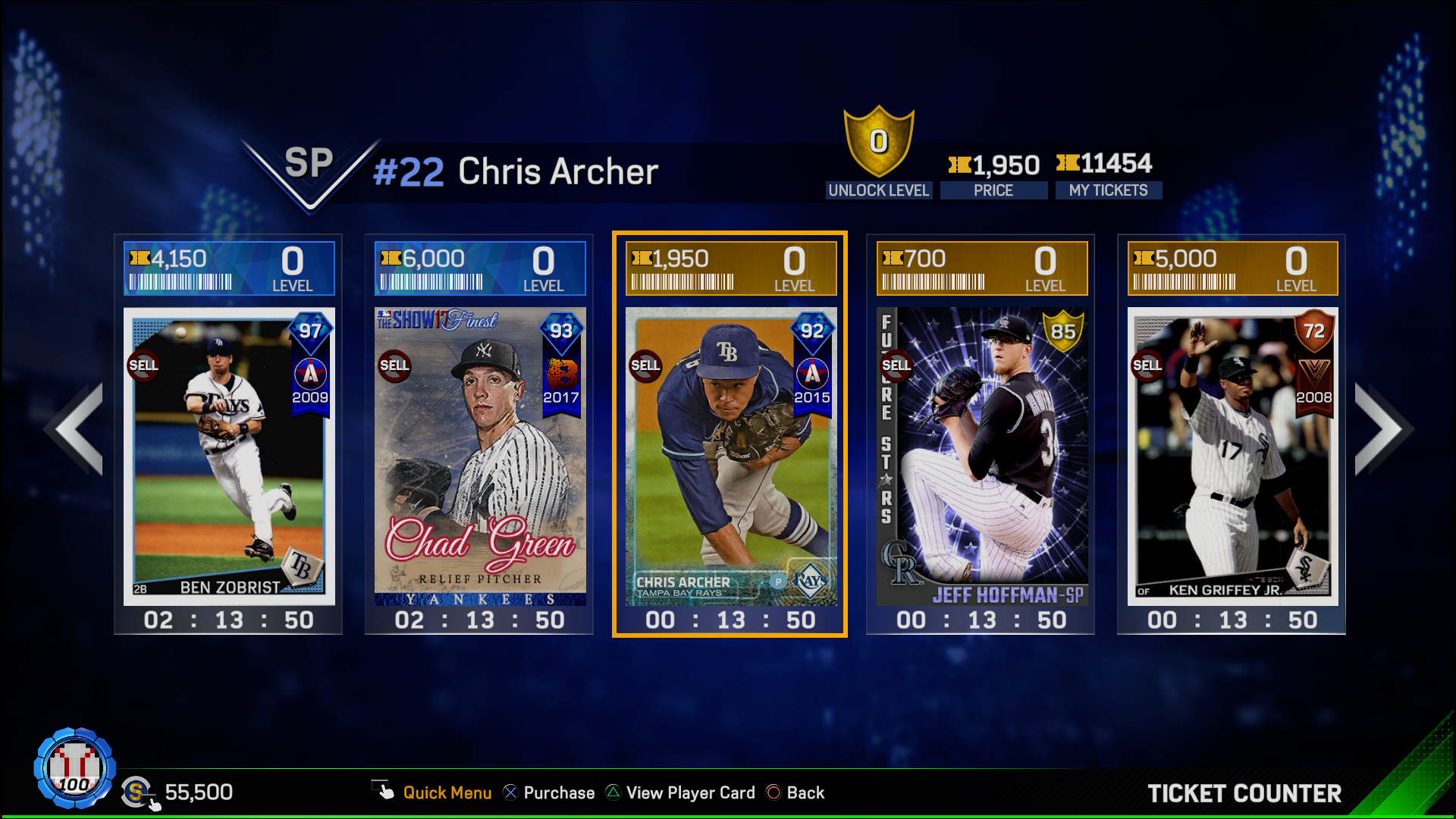 In the Ticket Counter, the launch day Gold and Diamond Mission starters that came with 2017 pre-orders can be purchased with Tickets. We included the players that will trigger missions in the Starter Mission category AND the player items that are the rewards. It’s up to you if you want to do the Missions to earn a pack that contains one of the player rewards, or just skip straight to buying the exact player you want with Tickets, such as All-Star Flashback Chris Archer (pictured above).

These Legends and Flashbacks will randomly rotate through different slots of the Ticket Counter based on the countdown timers.

These items trigger Starter Missions where you tally stats with the player in your lineup:

These items are found in the pack rewards for completing the Starter Missions, but you can also acquire them in the Ticket Counter now:

Q: How did you select the Finest Flashbacks and rate their attributes?
A: We selected players who performed the best at each position in 2017 based on traditional statistics and advanced metrics such as WAR. We factored in the award winners and omitted players who missed big chunks of the season. Any time you try to define the premier players at each position it brings about debate – and we did plenty of that in the studio. Several well-deserving players missed the cut, but that’s the case with any award selection process.

We rated the Finest players’ attributes like the majority of Legends and Flashbacks, which are based on their isolated stats from a single season. It differs from Live Series attributes, which take into account 3-year statistical averages.

Q: Why are the Forever Event games 6 innings long?
A: We like giving you options to play 3, 6 or 9 inning games in Diamond Dynasty to help fit the amount of time you want to play. Other modes have 3- and 9-inning games, and the Event offers something right in the middle.

Q: Will there be anything new in Diamond Dynasty after today?
A: Look for a few announcements on social media around the holidays, and claim your Ranked Season rewards on Jan. 16. Our team has its sights set on making MLB The Show 18 even better, and we are excited to show you more.